Necrotic ring spots are caused by a fungus (ophiosphaerella korrae) that attacks the roots of grass. In Utah, the disease is particularly damaging to cool season grasses such as Kentucky bluegrass. Shaded areas of lawn are usually most vulnerable to this fungal disease; however, necrotic ring spots can occur in any area of lawn. Signs 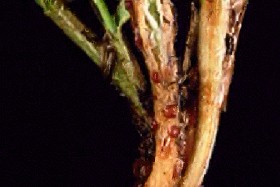 Snow mold appears as matted light brown areas of grass where snow has accumulated in piles on your lawn for an extended period of time. Snow mold tends to happen in areas where snow builds up in drifts or where it melts slowly, such as on the north side of a house. Snow mold produces 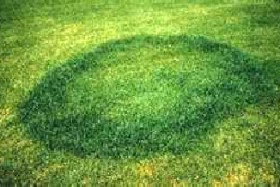 Fairy rings are produced by any one of over 60 species of soil-inhabiting fungi which feed on decaying organic matter (tree stumps, dead roots, construction lumber, thatch). These include soil-inhabiting fungi commonly known for the mushrooms, puffballs and toadstools which they produce. (Warning: Do not eat any type of mushroom which appears on the lawn 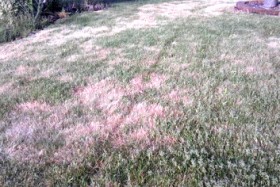 Examples of drought induced heat stress and lawn going into summer dormancy resulting from insufficient water or too long of time period in between lawn watering. If your lawn has areas that look similar to the photos above, it is the result of not enough water or allowing lawn to become too dry between waterings.